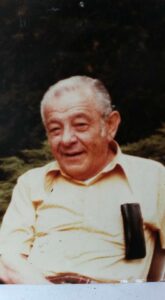 My favorite veteran would be 99 years of age had he been given more time on this good Earth.

He died 40 years ago. Peter John Kanelis was just 59 years of age when he perished in a freak boating accident up yonder in British Columbia.

I have saluted him already on this blog as we commemorate Veterans Day. I’ll do so again simply by thanking him for imbuing in me a sense of duty to my country. He exhibited the meaning of answering the call to duty on arguably one of the darkest days in U.S. history.

Japanese warplanes attacked our fleet at Pearl Harbor, Hawaii and Dad, who was just 20 years of age then, was listening to the radio reports of what had occurred. He got up from his chair and left my grandparents’ house in Portland, Ore. Dad ventured downtown to the armed forces recruiting station. The Marine Corps office was closed that Sunday, so he walked across the hall to enlist in the Navy.

Dad taught me implicitly years later about duty and honor and love of country. He didn’t generally volunteer much of about what he endured in the Mediterranean Theater of operations; I would ask him and he would talk about it. He was proud of the service he delivered to his country.

I am proud of him to this day. I also am proud of all the members of the Greatest Generation who triumphed over tyranny as well as all who served — and are serving in defense of this great nation.

If you see someone you recognize as a veteran, thank him or her. I do so regularly … in honor of my favorite veteran.

4 thoughts on “I salute my favorite veteran”