I am sharing two pictures that showed up on my Facebook page today. They depict two presidents of the United States. 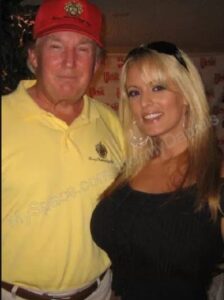 You know who they are.

The guy in the first picture is revered by the evangelical Christian movement. They like Donald Trump’s court appointments. They like his so-called “conservative” values he mouths when he hears them touted by right-wing radio and TV talking heads. The evangelicals give him a pass for the flings about which he has boasted, such as with the young woman pictured with him. Hey, no problem, they say. He’s one of us! Good grief!

The other president served a single term from 1977 to 1981. He teaches a Sunday school class at his church in Plains, Ga. Jimmy Carter also builds houses for poor folks as part of Habitat for Humanity.

The evangelical Christian movement sought actively in the 1980 campaign to deny him a second term as president. They preferred another fellow, Ronald Reagan, whose own commitment to matters of faith had been questioned as well, as he rarely darkened the doors of churches.

Jimmy Carter is the real deal. He just turned 96 years of age. He has battled cancer and has been the target of pundits who claim unfairly that he was a “failed president.”

I do not consider myself an “evangelical,” although I do profess my faith openly and joyfully. Still, I am left to wonder about the priorities of those who stand with a lying, conniving philanderer and who scorn a man who practices the faith in which he is committed deeply.