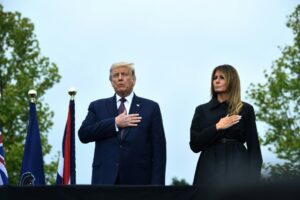 It is utterly impossible to avoid putting a political spin on news that Donald and Melania Trump have contracted the coronavirus that has killed more than 200,000 Americans.

I wish a complete recovery for the first couple.

I also believe that Trump should pay the ultimate political price because of what has transpired. He has tested positive for a virus he once called a “Democrat hoax,” which he has sought to play down because he didn’t want to “panic” Americans, which he keeps telling us is “under control” and which he has said will be disappear miraculously.

Donald Trump now becomes the leading exhibit for discussion about the falsehoods he has been telling for most of this year.

The pandemic is not getting any better. We’re in the middle apparently of yet another surge in illness and death.

Donald Trump is running for re-election partly by touting the “fantastic job” he says his administration has done. He has ignored medical experts’ advice about wearing a mask or keeping a social distance from others.

He is now paying a price. Trump is likely to pay a steep political price as well … as he should.

Trump mocked Joe Biden earlier this week because the Democratic Party presidential nominee wears a mask. Unbelievable! Biden shrugged it off with a chuckle.

We are heading now into the final month of the most unusual election season in anyone’s memory. Yes, the election will be a referendum on Donald Trump’s mishandling of the initial response to the pandemic. Indeed, his continued response has been an exercise in fecklessness, too.

There will be no more claims of “Democrat hoax.” Nor will there be any more mocking of those who wear masks or keep their distance from others. That’s all fine. The damage politically has been done to Trump, in my view.

That, too, is fine with me.