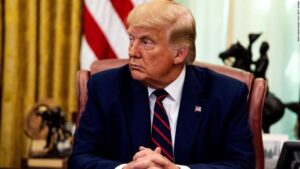 There should be no doubt over what the New York Times has reported to the world.

It is that Donald Trump is not the business wizard he told voters he was when he was elected president of the United States.

He has failed as a businessman. He has squandered the huge stake his father gave him when he began purchasing commercial real estate. Trump has acquired a debt load that would disqualify anyone seeking a national security job; and yet, here is the president lugging around a $400 million debt load.

To whom does he owe the money?

Mitt Romney, the 2012 Republican presidential nominee, warned us in 2016 when he called Trump a “phony” and a “fraud.”

Now we know what he meant. Mitt nailed it.

So, where do we go from here? We collect our thoughts and then prepare to replace the phony fraud with a man who vows to reshape our national soul, who vows to work to heal the deep wounds inflicted by the pathological liar who masquerades as our commander in chief.

We now can see through the New York Times’ exquisite reporting that Donald Trump laid the predicate for the disaster he brought to the nation through his failure as a businessman.