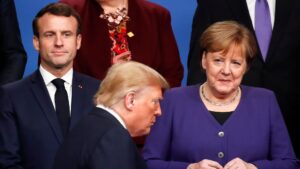 Let’s see how this looks.

Donald Trump has been impeached by U.S. the House of Representatives; he has insulted the military high command; he lets Russian spooks get away with putting bounties on our warriors; he admits to lying to Americans about the severity of the global pandemic; he has shattered our longstanding military and diplomatic alliances; he has presided over the greatest economic collapse in our nation’s history; he called Klansmen and Nazis “very fine people”; and he has lied about damn near every issue that he has (allegedly) confronted.

And still, this individual just might — even against these horrendous odds — wiggle/slither his way back for a second term as president of the United States.

How in the world might this happen, given Trump’s astonishing record as president of the United States? I cannot put my arms around this phenomenon. I am left to speculate that just possibly Americans have been snookered by the carnival barker who promised them to deliver salvation to a nation he said in 2016 had devolved into a “total disaster.”

And so here we are, four years later. The phony business executive not only has failed to deliver us from the illness that he vowed to cure all by himself, he has worsened it.

The pandemic has killed nearly 200,000 of us … so far. Trump has defamed war heroes and prisoners of war. He scolds our international allies. He has turned us from the world’s most indispensable nation to an international laughingstock.

How does he stay within spitting distance of Joe Biden, the Democratic nominee who by most objective measures should be running far away from Trump?

It’s a head-scratcher that utterly boggles my mind.