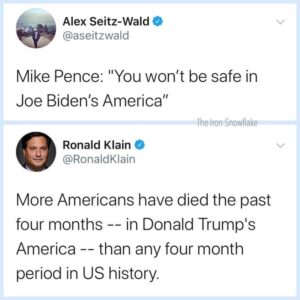 These Twitter messages illustrate rather nicely, in my oh-so-humble view, where Donald Trump’s re-election campaign breaks down.

The top tweet comes from someone quoting Vice President Mike Pence. You can see Pence’s message. Hold that thought.

The message from Ronald Klain offers a damning testimony to the reality of the moment. Klain, I should add, served on Vice President Biden’s staff in the Obama administration … so he has an axe to grind.

Klain does bring to light what should be painfully obvious to anyone with half a brain in their noggin. The coronavirus pandemic has killed nearly 200,000 Americans. The death and illness counts are climbing dramatically. They’re still going up and up. Why?

Well, because the Trump administration refused to act decisively when the pandemic arrived. He has been running a scattershot operation. He contradicts the advice of his handpicked medical experts on measures needed to stem the sickness and death rate.

Oh, and then there’s the civil unrest, the turmoil, the deaths of black Americans at the hands — and knees — of some rogue cops.

Is this a safe America? Is this the kind of nation we need to preserve with the re-election of Donald Trump? Hardly.

And yet the Trumpkin Corps keeps harping about how the United States will head straight to hell if Americans elect Joe Biden as president. Are you kidding me?