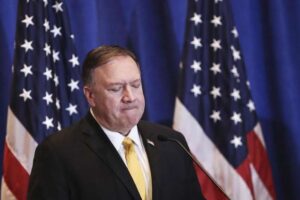 That was his way of saying that in the pursuit of foreign policy, we shouldn’t quibble over partisan matters, that we’re all Americans regardless of political affiliation.

I want to extend that notion a bit farther. Secretaries of state shouldn’t engage in partisan politicking while they are representing U.S. interests abroad, either.

Listen up, Secretary of State Mike Pompeo, I’m talking about you!

Pompeo is going to speak to the Republican National Convention tonight while he is in Jerusalem, ostensibly talking to Israeli leaders about this and that … such as crafting a comprehensive Middle East peace.

What the hell is he doing talking to the RNC about a partisan political matter, such as re-electing Donald J. Trump?

I know there’s nothing illegal about what Pompeo will do. Legality, though, doesn’t make it right. Thus, the secretary of state speaking to a partisan convention about a political matter just doesn’t pass the proverbial smell test.

This, I submit, is just one more time-honored tradition that Donald Trump has managed to destroy.