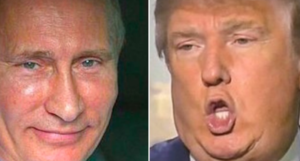 Our nation’s intelligence network — yeah, the folks you have denigrated in front of Vladimir Putin — have come up with some intel that says Russian spooks are paying Taliban terrorists money for every American serviceman or woman they kill on the battlefield in Afghanistan.

You said you weren’t briefed on it by the CIA, the DNI, the Joint Chiefs of Staff, the FBI, the National Security Council or the national security adviser. I don’t believe that for a second.

Still, the word is out. The New York Times has reported it. You dismiss it as “fake news.” C’mon! Get real. The Times is standing foursquare behind its story and the reporting that went into it.

You now need to get on that secure phone in the West Wing, you need to call Russian goon in chief Vladimir Putin and read him the riot act. Except you likely won’t do that. Why? I only can figure that Putin has some goods on you.

I mean, former national security adviser John Bolton says Putin plays you “like a fiddle.” I happen to believe Bolton. You dismiss your former adviser — one of the so-called “best people” — as a “wacko” and a “disgruntled employee.”

So now that the whole world has heard the story about the bounty, what in the name of tough-guy leadership are you going to do about it? Anything? Or are you going to roll over to get your overfed gut patted by the strongman who is laughing his a** off at the havoc he is creating within our system of government.