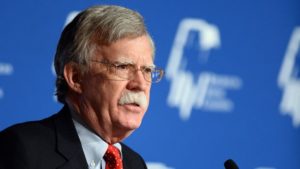 I wanted to cheer John Bolton when word got out that his memoir would hit the bookshelves.

I am left now only wanting to curse him.

The former national security adviser to Donald John “Liar in Chief” Trump has written a book that lays even more bare what many of us knew already. “The Room Where it Happened” is a blistering tell-all.

Why curse him instead of cheer the ex-national security adviser? Because he could have told us all of it during the impeachment of Trump. He didn’t. He sat on it. Why? Bolton says the impeachment was too narrowly focused and had become “too political.” What a crock of fecal matter!

I am cursing Bolton not because I believe his impeachment testimony would change enough minds to convict Donald Trump of abuse of power and/or obstruction of Congress — the charges the House brought to the Senate during the impeachment inquiry.

I curse Bolton because he withheld this information from a public that needed to hear it from someone who, as the book title suggests, was “in the room” when Donald Trump committed these impeachable offenses. He heard this stuff first hand, in real time, at ringside.

The Republican majority in the U.S. Senate that acquitted Trump of the charges brought against him likely would have been unmoved by any Bolton testimony. It’s just that Americans needed to hear this in the context of that impeachment trial and needed to hear GOP senators explain how Trump’s behavior didn’t rise to an offense worthy of his expulsion from office.

I am glad he is speaking out now. I happen to believe what he has said about Donald Trump. I just wanted him to speak out when it really mattered.

3 thoughts on “Wanting to cheer Bolton … but now cursing him”