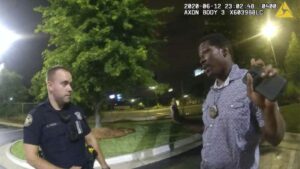 I’ve seen the video. You have, too. We’ve all seen it. The video is stomach-churning and heartbreaking.

Rayshard Brooks got stopped by Atlanta police. They tested his sobriety after finding him asleep in the drive-through lane at a Wendy’s restaurant.

He took a Breathalyzer test and came up slightly inebriated. He offered to walk to his sister’s house just a few blocks away. The cops sought to handcuff him instead. Brooks resisted; he wrestled a Taser stun gun from one of the cops; he ran away.

The cop — Garrett Rolfe — shot him in the back … twice while he was fleeing, running for his life. Brooks died later in a hospital.

Now the cop is charged with felony murder. This looks like a legitimate accusation to level at the former officer.

The ex-cop is white; Rayshard Brooks was black. It is another case in a distressingly long line of cases involving white police employing the heavy hand of the law on a young African-American. To think, as well, that this case happened while the nation is still reeling from the George Floyd case in Minneapolis, where another white officer snuffed the life out of Floyd, a black man who allegedly tried to pass a counterfeit bill.

Oh, my goodness. When will we learn? Ever?

One thought on “Ex-cop faces some serious prison time”