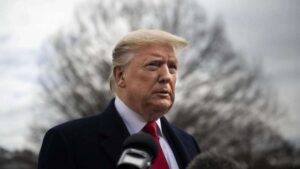 Knock it off, Mr. President.

Your demand that CNN retract and apologize for a public opinion poll that puts you 14 points behind Joe Biden is ridiculous on its face.

It’s also a bald-faced, hardly veiled ploy to fire up your shrinking base of supporters who just cannot accept your failure to lead in the wake of the COVID pandemic and your ghastly response to the killing of George Floyd in Minneapolis.

CNN says it stands by its polling. Your damn right it does. It certainly should stand by it. Your childish claim that CNN’s polling is faulty deserves to be laughed out of any room where it is brought up.

Let’s get real, Donald. You very well might lose your re-election bid. Sure, I get that you pulled your chestnuts out of the fire at the last minute in 2016 and surprised everyone on Earth by defeating Hillary Clinton. I suspect you surprised even yourself, as it has been reported over the years that you were so sure you’d lose that you hadn’t done any pre-transition planning prior to declaring victory on Election Night 2016.

Well, that was then.

I doubt the former VP is going to get sucked into the trap that swallowed up Hillary four years ago.

As for the polling, you’d better just live with it, accept the grim numbers and seek to turn them more in your favor.

Oh, and just for the record … I hope you fail in that effort. I will do my part to ensure you get drummed out of the office you had no business winning in the first place.