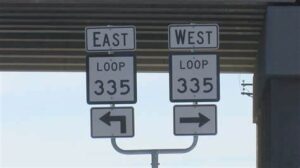 AMARILLO, Texas — This one got past me, which is no surprise, given that I now live about 375 miles east-southeast of here.

We returned to the city we called home for more than two decades and I discovered that the Texas Department of Transportation has been working on rebuilding Loop 335 around the western edge of the city.

The RV park into which we pulled our fifth wheel sits just a bit north of where the work is ongoing. One of the managers there told me that it’s “going to get crazy around here” for a lot of years into the future as TxDOT seeks to remedy what it should have done years ago when it build Loop 335 … which in reality isn’t a loop at all.

As if the years-long widening of Interstate 40 hasn’t created enough hassle and headache for motorists.

I have lamented before on High Plains Blogger that Amarillo’s loop — such as it is — doesn’t resemble a real loop, such as the one that encircles Lubbock, about 120 miles south of Amarillo. However, as one observer told me years ago, it certainly helped when Loop 289 got the go-ahead to circle Lubbock, the governor at the time, Preston Smith, was, um, a native of Lubbock. Hey, it helps to know people in high places.

Loop 335 has become a bottleneck along Soncy Road from Interstate 40 to Hollywood Road.

TxDOT finally got off the dime and started building an extension of the loop west of Soncy. From what I have understood all along, TxDOT is going to created a limited access loop that allows traffic to flow easily. They’ve nearly completed an improvement to Loop 335 along its route along the southern edge of the city.

What has always struck as odd, weird and frankly beyond rational explanation is why they built the thoroughfare to encircle Amarillo without thinking of it as a “loop” that functions the way roadways of this nature usually do. Loop 289 is designed to allow traffic to bypass Lubbock central areas. The aim is to lessen traffic to the extent it is possible.

I can’t help but wonder if the state had done the right way when it first built Loop 335, it might cost the state a good bit less than what it is spending now all these decades later. Just sayin’, man.

The length of time it takes to finish Loop 335 along Helium Road in Amarillo remains a mystery to me. We’ll be back many times in the months and perhaps even years to come. I suspect we’ll see more progress develop with each visit.

Oh, and highway crews still have that monstrosity along I-40 to complete.

I’ll keep our many friends here in our thoughts and prayers.