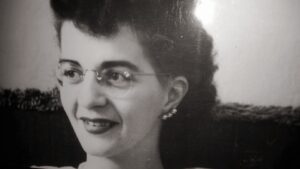 The picture you see with the blog post is of a beautiful young woman who would become my mother.

I don’t know when this picture was taken. I’m going to make a wild guess and say Mom is about 19 years of age in this photo. That means she was four to five years away from marrying my father, who at the time this picture might have been snapped was fighting like hell to save the world from tyranny during World War II.

Mnostoula Filipu would take Dad’s name and become a Kanelis.

I wish I could extend Mother’s Day greetings to her. I cannot, at least not in the worldly way we do when our parents are among us. Mom has been gone since Sept. 17, 1984.

She was dealt a bad hand that resulted in what I consider to be a premature death. She was 61 years of age when she succumbed to the ravages of Alzheimer’s disease. To be honest, I still have difficulty wrapping my noggin around the notion that I have outlived her by nine years; my sisters, both of whom are younger than I am, also have lived longer than she did.

She likely exhibited early-onset symptoms of this killer disease a decade or so before she passed on. I have difficulty remembering when we first started noticing changes in her behavior.

However, I do remember something she told me many years earlier. She said she thought every single day of her own father, my Pappou, who died in January 1950 at the age of 62. She said it was natural to think of him. It was mostly in passing, she said. She didn’t dwell on his death or wallow in grief over it.

And so it has been for me every day since Mom left us nearly 36 years ago. I think of her, too, each day. It’s usually in passing, just as she thought of her father.

I do miss her … every day. I also know she will remain in my own heart for as long it beats.