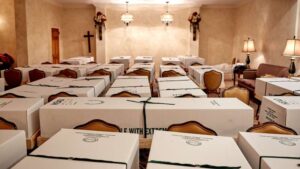 He doesn’t grieve openly. He won’t be seen wiping tears from his eyes. The president is too preoccupied with “making America great again,” and “telling it like it is.”

Donald Trump finds himself concocting rosy scenarios where none exists. He is separating himself from the suffering that is occurring in rural America and in our inner cities. He doesn’t seem interested in dealing on a personal basis with those who are suffering untold heartbreak.

As The New York Times reports: As he presides over the coronavirus pandemic and resulting economic collapse, Mr. Trump has hosted o called many people affected by the devastation, including health company executives, sports commissioners, governors, cruise ship company heads, religious leaders, telecommunications executives and foreign heads of state. One category that has to make his list: Americans who have lost someone to the pandemic.

I will not hold breath waiting to hear from anyone of those victims out here who has received a phone call from Donald Trump.

Trump’s failures as a leader are becoming even more evident than they were already. Many of us knew he lacked the compassion gene, or the gene that enables him to hurt along with the country. It’s just that watching all this play out in real time remains a sight to see.

While the country’s death toll soars past 60,000 individuals, Trump launches Twitter tirades and chastises: CNN, Democratic politicians, the media in general, China, MSNBC, Fox News. He can’t even take time on Twitter to say how profoundly sorry he is to hear about the misery that millions of Americans are feeling.

They are hurting because they have lost their jobs. Their loved ones have died from the viral infection. Their businesses are withering.

Donald Trump’s reaction? It is to blame others for his own failures and to lie about what a “fantastic” job he and his team are doing.