Our nation’s evangelical Christians still seem to be all in with Donald John Trump.

He is their guy. He nominates judges to the federal bench who will rule the way evangelicals want them to rule. Therefore, Donald Trump — who has no known active association with any church that anyone can detect — is just fine in their version of the Good Book.

The rest of the Christian community — and you can count me among that crowd of patriotic Americans — are still scratching our noggins over this clown’s vise grip on the evangelical movement.

I harken back to the time he referred to the apostle Paul’s second letter to the Corinthians as “Two Corinthians.” No faithful Christian ever would refer so clumsily to that New Testament book, right?

And then … we had Donald Trump just this past Easter weekend wish us all a “happy Good Friday.” That made me chuckle, given that Good Friday is arguably the most somber day in all of Christianity; it’s the day Jesus Chris was crucified. The joy arrived three days later, according to Scripture, with Jesus’ resurrection.

Still, this president remains the main man among evangelicals.

A meme showed up on my Facebook feed. I want to share it here. It’s a grossly overstated critique of evangelicals’ fawning fealty for this cult figure, but it speaks for many of us who are thoroughly and profoundly disgusted with the outcome of the previous presidential election. 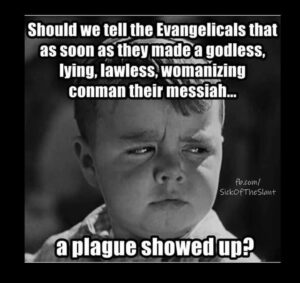 Donald Trump doesn’t even have a passing acquaintance with the Holy Word as printed in the Bible. It is not just evident. It is obvious to any of us who have read holy Scripture and who come away with our own interpretation of what it instructs.