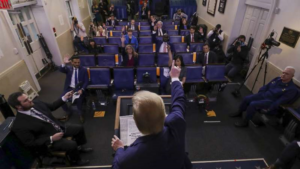 Jeremy Diamond is a fine young reporter for CNN, who on Sunday was doing his job while sitting in the White House press briefing room. His job includes asking probing questions of the man standing in front of him, the president of the United States.

Diamond happened to ask Donald John “Stable Genius” Trump why, in the face of a death count from coronavirus that topped 40,000 in the United States, he was congratulating himself for the “great job” he said he is doing. Diamond asked “Is this the time” for such “self-congratulation?”

That sent Trump into orbit. He said CNN delivers “fake news” and said he was speaking on behalf of all the first responders. He said Diamond doesn’t “have the brains you were born with.” Then he compared the treatment he allegedly gets from the press to what President Abraham Lincoln got when he ran for president in 1860. Good ever-lovin’ grief, man!

If you listen to Trump’s campaign rally-style riff at the briefing room, it is clear that he is speaking ofhimself and not of the men and women he purportedly was praising. Thus, Diamond posed a perfectly legitimate question of the individual who signed on to the presidency knowing he would be questioned aggressively by the media whose job is to hold him accountable for his actions.