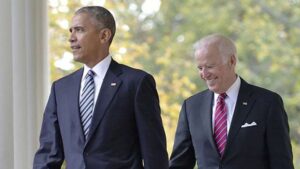 Donald Trump chided Joe Biden this week, wondering out loud why Barack Obama hasn’t endorsed the former vice president who now wants to run against Trump in the 2020 presidential election.

Well, Trump knows why, but I’ll offer my belief here.

President Obama has chosen to take the conventional route in presidential primaries. He didn’t want to enrage loyalists for other candidates still running by backing the man who served with him for eight years from 2009 until 2017.

The last candidate facing Biden, Sen. Bernie Sanders, has bowed out. Now the road is clear for the former president to weigh in.

Earth to The Donald: There it is for you. Spelled out.

Trump, of course, doesn’t adhere to that playbook. He has weighed in repeatedly during Republican primaries in 2018 and again this year. Some of the endorsees have won, others have lost their primary fights. There’s been plenty of GOP backbiting after the votes have been counted, with Republicans arguing with each other over the impact that Trump’s endorsement might have brought to the result.

President Obama doesn’t want to get involved in that sort of intra-party squabbling.

It’s been a time-honored strategy.

I am pretty certain now that Joe Biden is the last man standing in the once-huge Democratic Party primary field that Barack Obama will cut loose.

It will be fun to watch.