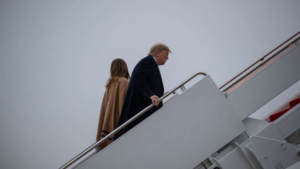 I have been waiting for as long as Donald Trump has been a politician for a day of reckoning, the moment when this carnival barker masquerading as the president of the United States commits the act that finally spells an end to the nightmare through which we are living.

Trump’s political life began the day he rode down the escalator with his wife to declare he would run for the presidency.

It has been all downhill ever since.

Yep, even with that once-soaring stock market and those formerly glowing job-growth numbers. The man has been, to borrow one of his favorite terms, a disaster as POTUS.

The litany of boorish antics, idiotic statements, the endless lies, the hideous denigration of noble people and institutions is too lengthy to chronicle here.

I am left to wonder: Is Trump’s coronavirus pandemic response — or shameful lack of response — the deal breaker, the one thing that finally awakens his cadre of base voters to a realization that, by God, we have made a monumental mistake?

I am not in the mood to predict that it will. I mean, I thought Trump’s slur of the late Sen. John McCain’s war record was enough to do it. Then I thought his mocking of the New York Times reporter’s physical ailment would do it. Oh, and then there was the hideous disparagement of the Gold Star couple at the Democratic National Convention. Or the “grab ’em by the pu***” statement. Or his dissing of our intelligence agencies’ assessment that Russia attacked our electoral system in 2016. We had an impeachment and a Senate trial.

It never ends. Yet the Buffoon in Chief has survived.

Now we have this. The coronavirus pandemic has produced a record full of Trump statements that resulted in a tragic delay of a federal government all-out response to the outbreak. He has mangled medical experts’ assessments of the crisis; he contradicts statements made by the brilliant scientists on whom he is supposed to rely for advice; and he keeps lying.

This takes me back to my original question. When is this clown going to be held accountable for the disaster he has created in the only public office he has ever sought?