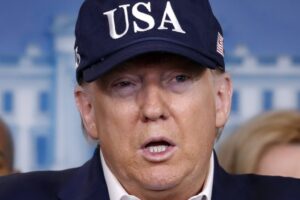 A family member of mine — someone with whom I joust occasionally about the president of the United States — says that no one could have responded to the coronavirus pandemic perfectly.

I guess that is his way of suggesting that Donald Trump has done the best he could do and that we should appreciate all he’s done in the wake of the crisis that has killed thousands of Americans.

I need to respond briefly to my dear family member.

He is correct in suggesting that perfection is too high a hurdle to clear in times like this. Indeed, I haven’t heard a single Trump critic say that the president should have or could have responded perfectly. What I do hear are concerns about the utter incompetence of his response and that he failed to respond immediately to the very beginning of the crisis as it developed.

Trump’s downplaying of the crisis severity initially is what slowed the national response. Of that there can be little doubt, and yet he told us he responded “perfectly.” He used that word, as if to compare it to that infamous phone call he made in June 2019 to the Ukraine president. It was Trump, no one else, who ascribed perfection to a national response that was far from it.

I am never going to say that a fallible human being — even the president of the United States — is going to do anything with utter and absolute perfection. The very nature of our humanity accepts that all of us make mistakes.

I should add, too, that the framers of our nation’s government stated in the preamble to our U.S. Constitution that they intended to “form a more perfect Union.” You see, even those great men knew that absolute perfection was unattainable even in creating this marvelous governing document.

I have not expected perfection from our president in his handling of this monumental crisis … but I damn sure expected a lot better than what we’ve gotten so far.