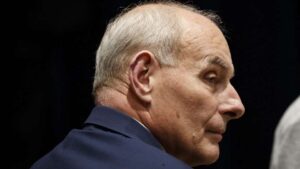 Donald John Trump is engaging in a verbal skirmish with another of his top former advisers.

The foe this time is a decorated combat veteran, a retired U.S. Marine Corps general, a Gold Star parent whose son was killed in Afghanistan, a gentleman who served as White House chief of staff: John Kelly.

Gen. Kelly has come to the defense of Army Lt. Col. Alexander Vindman, whom Trump fired after he testified to the House about concerns he had over the phone call Trump made to the Ukraine president. This was the call in which Trump asked Ukraine for a political favor. Vindman said the nature of the conversation worried him.

Kelly said Vindman was following military protocol when he reported his concern to his superior officers.

Kelly, in an article in Atlantic, had questioned the president’s decisions relating to North Korea and has challenged Trump’s description of immigrants as murderers and rapists.

Trump’s response has been to say that Kelly can’t keep his mouth shut.

Hmm. Who am I to believe? An honorable Marine who spent his adult life serving the public and defending this nation against its enemies? Or do I believe an admitted philanderer, a man who couldn’t tell the truth under any circumstances, and someone who spent his entire adult life seeking to enrich himself, quite often at others’ expense?

I believe I will stand with the general on this one.