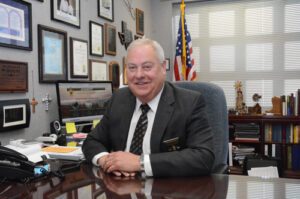 Randall County Sheriff Joel Richardson is as honorable a man as I’ve known in public life. So, when he posts a document taking a fellow law enforcement official to task, well … I tend to look carefully at what he has to say.

Richardson is disturbed by what he alleges is being done by the county’s Precinct 4 constable, Chris Johnson. Richardson has endorsed Johnson’s opponent in the upcoming Republican Party primary election.

To say this is unusual is to, um, commit the Mother of All Understatements.

Richardson, who is not seeking re-election as sheriff, wants GOP voters to back Paula Hicks in the March 3 primary for Precinct 4 constable.

He has issued a blistering statement that accuses Johnson of some pretty catty behavior while serving as constable. He alleges that Johnson has been abusive to juvenile drivers, he accuses Johnson of driving away in a sheriff’s deputy’s cruiser and driving it well in excess of 100 mph through Amarillo, he says Johnson has “frisked” motorists who had been stopped by deputies “without probable cause.”

I won’t endorse the specifics of what Richardson has alleged. I just know the sheriff to be a man of integrity and a decidedly non-political cop, even though he has politicked for the office he has occupied for more than 20 years.

What’s more, for a sheriff to get involved in an openly political contest involving another law enforcement official — albeit a fellow politician — suggests to me that the sheriff has a serious bone to pick with the fellow he is criticizing.

Richardson refers to his statement as an “urgent and open letter to the voters of Randall County, Texas, Precinct 4.”

They would be wise to pay attention.