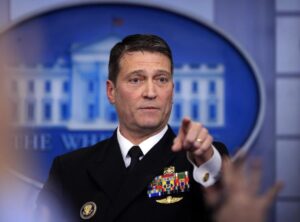 Our return over the past few days to the 13th Congressional District exposed us to some TV ads touting the candidacies of those who are running to succeed Rep. Mac Thornberry, who’s leaving office at the end of the year after serving for 25 years representing the Texas Panhandle.

I didn’t hear a TV spot from one guy who’s caught my interest, although I did see some yard signs as we blasted through Claude and Clarendon on our way to Amarillo and then back home to Princeton.

Dr. Ronny Jackson is among the huge number of Republicans seeking the GOP nomination. He intrigues me to the max? Why is that?

He’s kind of a national figure. Donald John Trump, the nation’s current president, nominated him to be the nation’s veterans affairs secretary. It turned out, though, to be a bad call on POTUS’s part; Jackson has zero administrative experience and he also allegedly prescribed drugs wrongly. Jackson pulled his name out of consideration as VA secretary.

Now he wants to run for the U.S. House — in a district where he’s never lived. Indeed, the only West Texas connection he has is his place of birth … in Levelland, which sits in a congressional district that is near the 13th.

What does this guy know about Pantex, the nuclear weapons storage complex known colloquially as the “Bomb Factory”? Or how does he comment intelligently about the nitty gritty of the V-22 Osprey aircraft assembly plant in Amarillo? How about federal farm policy, which is vital to cattle ranchers, cotton producers, corn growers throughout the Texas Panhandle?

I am hoping that my GOP friends in the Panhandle will know better than to cast their vote for an individual whose only notable achievement was to be nominated as veterans secretary and to serve as physician to two presidents: Donald Trump and Barack Obama.

Hey, I honor Dr. Jackson’s military service, given that he’s a now-retired rear admiral in the U.S. Navy. That’s it and that is far from sufficient for anyone to be nominated by a major political party to serve in a congressional district with which he has zero familiarity.