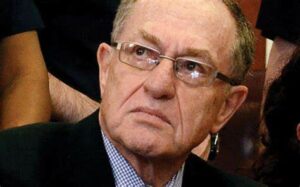 Alan Dershowitz has been recruited by Donald John Trump to join his defense team that will fight to stave off the current president’s potential conviction and removal from office.

The U.S. House of Representatives impeached Trump on two articles: abuse of power and obstruction of Congress. To my mind, the House impeachment managers have made the case. He abused his power by asking Ukraine to interfere in our 2020 presidential election and obstructed justice by blocking all White House officials from answering congressional subpoenas.

The president’s team will seek to rebut them.

Dershowitz, though, is going to argue — as I understand it — that the impeachment articles somehow violate constitutional precepts, that abuse of power is not an impeachable offense.

I hate to disagree with an esteemed law professor emeritus at Harvard University … but I think I will.

We all know the answer. Nothing has changed!

It’s too bad senators are required to sit there silently in the Senate chamber. None of them is allowed to object to what they might hear.

Indeed, I would find it highly objectionable for esteemed professor Dershowitz to say out loud that a president cannot be impeached for abusing the power of his office when, truth be told, he most certainly can.

I am so-o-o-o-o looking forward to hearing how Donald Trump’s team seeks to defend him.