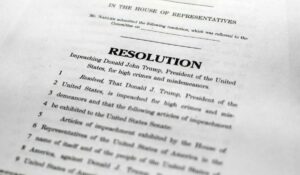 Donald John Trump’s legal team has declared that the impeachment articles that will be serve as the basis for a U.S. Senate trial to determine whether Trump keeps his job as the current president of the United States are “unconstitutional.”

What? They can’t be serious!

The nation’s governing framework lays out in black and white that the House shall have “sole power” to impeach a president. That’s what it did. The House didn’t break any rules, didn’t violate any law, it didn’t skip any pre-ordained process laid out. The House followed the process to the letter.

Donald Trump solicited the president of Ukraine for a political favor. He wanted Ukraine to launch an investigation into a possible political foe. He then sought to withhold military aid to Ukraine, which is fighting rebels backed by Russia. Right there is your abuse of power, Mr. President.

It was all done according to the process laid out in the Constitution.

For the Trump legal defense team to offer up a lame “unconstitutional” rationale is ridiculous on its face.