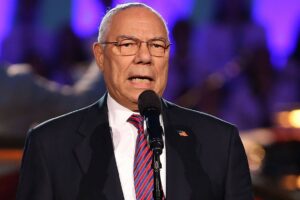 Colin Powell is a patriot’s patriot. I admire this man greatly, owing in large measure to his experience as a combat soldier in Vietnam and his military and diplomatic leadership.

Powell said the following recently in a stern message to his fellow Republicans: “They need to get a grip, and when they see things that aren’t right they need to say something about it. Because our foreign policy is a shambles right now, in my humble judgement. And I see things happening that are hard to understand.”

Yep, that policy is in a shambles, all right.

The Republican Party movers and shakers, he said, need to stand up to Donald J. Trump, the president who’s grabbed the party by the throat.

Foreign policy? It doesn’t even exist. The president issues policy pronouncements via Twitter with little or no regard to advice from national security/diplomatic experts with whom he has surrounded himself.

I get that Gen. Powell isn’t perfect. He did, after all, read that statement into the record at the United Nations in which he said Saddam Hussein undoubtedly possessed weapons of mass destruction; he made the case for going to war in March 2003 against the Iraqis. He was tragically wrong.

However, he remains a man of great standing in many circles in this country. With that, I want to endorse his call for his fellow Republicans to exhibit some backbone as they watch Trump’s feckless efforts at seeking to “make America great again.”