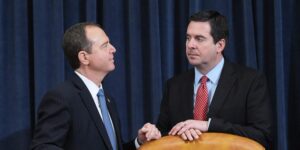 It occurred to my wife and me this evening as news broke about the House Intelligence Committee’s report on its impeachment findings just why Chairman Adam Schiff was able to keep his cool while ranking member Devin Nunes kept ranting during the public hearings about so-called Democratic games.

Schiff knew what was coming, that the Intel Committee’s evidence would implicate Nunes as a key player in the impeachment drama involving Donald Trump, his lawyer Rudolf Giuliani, Ukraine and the sordid other characters.

It appears that Nunes had plenty of contact with Ukraine government officials, seeking Ukrainian help in digging up dirt on Joe Biden and his son, Hunter.

So, while Nunes was preening and posturing about alleged nefarious Democratic motives in seeking to impeach Trump, he well might be involved in his own nefarious activity.

Schiff, experienced prosecutor that he is, kept his cool. He knew what would be revealed.