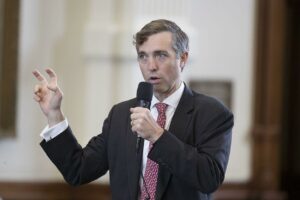 Gosh, it’s been about a month since I wrote my congressman a letter. I asked him directly for a response to a question that had been nagging at me. He hasn’t delivered his answer.

Van Taylor is a Plano Republican representing the Third Congressional District of Texas. He’s been in office only since this past January. Maybe he’s been too busy trying to find his way around the massive U.S. Capitol Building.

I asked him why he voted “no” on sending the impeachment inquiry into the public domain. He and other Republican lawmakers had yapped about so-called “secrecy” regarding the closed-door testimony the House Intelligence Committee was receiving from witnesses.

Taylor said “no” to taking it to the public. How come? I want to know.

OK, I’ve been a little busy the past couple of weeks. I still intend to phone his office. I have a couple of business cards from key staffers. I plan to call his Plano district office, the one closest to his constituents. I happen to one of them.

Van Taylor, who I have described as — and still believe him to be — an earnest young man. He’s a Marine Corps veteran who saw duty during the Iraq War. I certainly salute his veteran status.

I do not salute his recalcitrance over this issue of taking the Trump impeachment inquiry into the public. I need to know why he voted against bringing it into the open.

I’m his boss. He answers to me, not to Donald Trump.