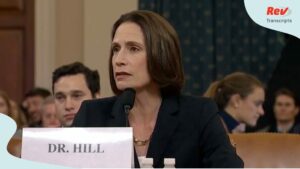 What do Lt. Col. Alexander Vindman, Fiona Hill and Marie Yovanovitch have in common?

Two things: They all are naturalized U.S. citizens and they all have been smeared and slimed by congressional Republicans who have questioned their loyalty to the country they chose to call their home. Moreover, they all have chosen to serve their country with distinction, valor and heroism.

They all testified over the past two weeks before the House Intelligence Committee, which conducted its inquiry hearings into whether to impeach Donald J. Trump for high crimes and misdemeanors.

First up was Marie Yovanovitch, the former U.S. ambassador to Ukraine who Trump recalled earlier this year, citing his prerogative as president to do what he did. He smeared the decorated envoy prior to removing her and then afterward, even while she was testifying to the House panel about what she saw and heard regarding Trump’s asking the Ukrainian government for a personal political favor.

Then we heard from Lt. Col. Vindman, a Ukrainian immigrant who came to this country with his family when he was a toddler. The National Security Council adviser joined the Army and has served for two decades as an infantry officer, receiving the Purple Heart after he wounded in battle in Iraq. GOP lawmakers and their friends in the conservative media have questioned Vindman’s loyalty to the country, suggesting he was secretly more loyal to his native Ukraine than to the nation he has served heroically.

Finally, we had Fiona Hill, the British immigrant and former NSC adviser who testified this week about her concern over whether the nation was sacrificing national security for the sake of a “political errand” being run by European Union Ambassador Gordon Sondland on behalf of the presidents of the United States and Ukraine. She, too, has been dismissed in some circles because she is, um, an immigrant.

These people all represent the best of this great nation. They are proud patriots who love this country deeply and have stepped forward to serve with the highest honor imaginable. They represent millions of Americans who are themselves immigrants or the direct descendants of immigrants who chose to venture many thousands of miles to build new lives.

That their loyalty would be questioned at any level by anyone is shameful on its face.