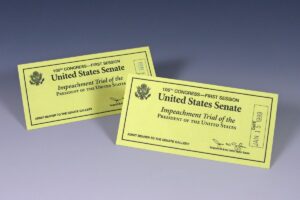 Hey, hold on for just a minute or maybe two!

The House of Representatives is getting ready to impeach the president of the United States in connection with allegations that he solicited a personal political favor from a foreign government. Once the House approves the impeachment articles, the matters goes to the Senate, which then will have a trial.

Why, then, is Donald Trump schmoozing with “jurors” who will have to weigh the evidence presented to them and decide whether to convict him of assorted high crimes and misdemeanors.

Trump launched a charm offensive by inviting some Republican senators to the White House. He talked with them — privately, of course. Some of those GOP lawmakers include at least a couple of them who might be inclined to want to convict the president. I refer to Mitt Romney of Utah and Susan Collins of Maine. Hey, there might be a lame-duck GOP senator in the mix, too.

I know it’s not a fully legal proceeding that the Senate will launch. It’s a political one, steeped in partisanship. However, some legal principles are brought into play here. One of them surely must be this quaint idea that “defendants” shouldn’t “tamper” with the jury pool.

The Senate’s 100 members are going to serve as jurors in this upcoming trial. The Republican members need not hear sweet nothings whispered into their ears by the Republican president whose conduct in office has brought us to this sorry and sad chapter of our nation’s political life.