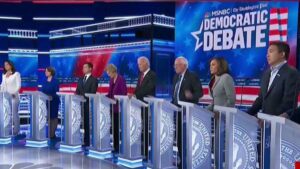 It hurts to say what I am about to say, but here goes.

As much as I like and admire Joseph R. Biden Jr., I am concluding that his time has past and that he is not the right man at this time to become the next president of the United States.

The former vice president remains the frontrunner for the Democratic Party presidential nomination. To be honest, I do not yet know how I will vote when the Democratic primary parade rolls into Texas in the spring. Biden’s presence on the ballot likely will complicate my choice.

I have become afflicted with a bit of “joint candidate appearance fatigue,” which means I did not watch the latest one Wednesday night. I have heard about Joe Biden’s latest gaffe, when he said he has earned the endorsement of the “only” African-American woman elected to the U.S. Senate; he was referring, I presume, to former Sen. Carol Mosely-Braun … but she isn’t the only one elected. The other African-American female senator stood on the podium along with Biden; her name is Kamala Harris.

This kind of stumble-bum rhetoric is grating on me. I don’t doubt Biden’s mental acuity. I believe he remains intellectually intact. I also believe he gets too worked up, too excited, wound too tightly to offer measured and reasonable pronouncements at all times.

I believe Democrats should nominate someone on what I would describe as the center-left portion of the spectrum. That would be Biden. Except that he keeps tripping over his own tongue. I do not want that in the next president.

I once posited that Democrats need to look for a newcomer, someone who jumps out of the tall grass, someone no one had heard of before the start of the current election cycle. That someone also should stand toward the center, but lean a bit left.

The individual who seems to fit that bill is Pete Buttigieg. He is intellectually sharp; he is a political moderate; he has executive experience as the mayor of a smallish American city; he is veteran who has served in a war zone.

I don’t want a flaming lefty. I don’t want a socialist, or a “democratic socialist” or someone who is trying to make some sort of a statement to be nominated and then elected. Nor do I want yet another billionaire business mogul.

We have a long road to travel. There will be plenty of twists, turns perhaps even a crackup or two along the way.

Perhaps the former veep can pull it together. However, the seeds of doubt are beginning to sprout.