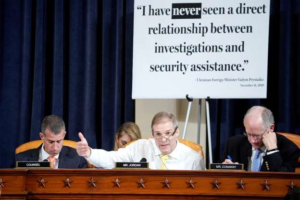 U.S. House Speaker Nancy Pelosi and U.S. Senate Minority Leader Charles Schumer have offered Donald J. Trump an “invitation” that should be called by another name.

It is a political stunt that at one level seems like a reasonable offer, but in reality is something that will never occur.

Trump has complained incessantly that the House impeachment inquiry is unfair to him. The House is seeking to determine whether to file impeachment articles against the president in connection with his asking a foreign government for a personal political favor, an action that House Democrats deem to be an impeachable offense.

Trump keeps insisting it’s all a hoax, a witch hunt, a sham, a political hatchet job. So, what did Pelosi do? She invited him to testify before the House Intelligence Committee, to tell his side of the story, to put to rest any allegation that he jeopardized our national security by holding up weapons to an ally until it produced dirt on a potential political rival.

Well, let’s get real. POTUS isn’t going to accept it. He will assert some rationale that he is somehow above and beyond being questioned in person by members of the House of Representatives.

Then again, Schumer did go a step further. He said that if Trump doesn’t like what’s being said, “he shouldn’t tweet” his disagreements. He should subject himself to questioning by House members. Moreover, Schumer said, he should allow those closest to him to testify before the House panel.

That, of course, assumes he has nothing to hide, according to Schumer.

I’m going to presume that he has plenty to hide, which is why Pelosi’s invitation is nothing more than a stunt.