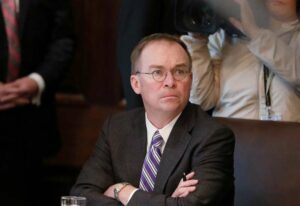 This is hardly a flash, but it looks for all the world as if “acting” White House chief of staff Mick Mulvaney is heading for the exit.

It turns out that Donald Trump chose to keep his chief of staff in the dark prior to the launching of the most important military mission of his presidency: the killing of Islamic State founder Abu Bakr al-Baghdadi.

Mulvaney reportedly as at home in South Carolina when Trump tweeted the message: “Something very big has just happened.” Mulvaney then was brought up to speed as the mission was commencing.

What is so odd and frightening about this revelation is that White House chiefs of staff normally are part of the national security team that meets to discuss such operations prior to their being launched. Not so with Mulvaney.

Andy Card, chief of staff for President Bush 43, said he is “baffled” by Mulvaney being left out of the planning of such an event.

Mulvaney’s “acting” status has been in place since he took the job after John Kelly departed at the start of this year. Then he held that disastrous White House press briefing a couple of weeks ago in which he admitted that Trump asked for a political favor from the head of a foreign government, telling the media and others to “get over it.”

So, the guy who once ran the Office of Management Budget only to step into the snake pit known as the White House is likely on his way out. Just think that this is payback for the guy who famously said when he took the White House job that he intended merely to “let Trump be Trump.”