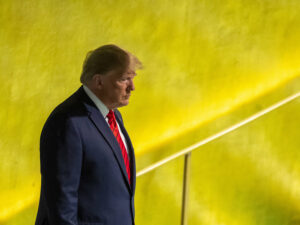 I am not sure I get how this goes.

Donald Trump did not notify congressional Democratic leaders in advance of the raid that killed the leader of the Islamic State over the weekend on grounds that he feared “leaks” that could jeopardize the critical element of surprise.

The president, though, did inform congressional Republicans of the raid as well as — and this is really rich — the Russians and the Turks! Yep, Russia and Turkey got a heads-up in advance of the raid, apparently because the president trusted those two hostile powers, one of which attacked our electoral system in 2016 and is doing so again in 2020.

But not the Democratic leadership. Not the individuals who are chairing key House committees charged with monitoring events related to our national security. Not the folks who need to be kept in the loop when our armed forces are deployed on these critical missions.

Did he really believe the Democratic House chairs and the Senate Democratic leadership would blab to the world about what was about to happen? Or is he miffed because House Democrats want to hold him accountable for the deeds that are likely to lead to his impeachment?

I believe the embattled commander in chief is suffering from a case of acute and destructive petulance.