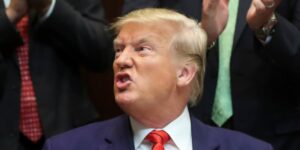 By golly, the president of the United States said yet another idiotic utterance.

This time Donald Trump equated the bloodshed in Syria to a “schoolyard fight” between, I guess, middle schoolers settling an argument over something that need not come to blows.

His comments came in the wake of the Turkish invasion of northern Syria and the attacks the Turks were launching against our Kurdish allies, the folks who have died by the thousands fighting the Islamic State alongside our forces and those in Syria trying to eliminate the monstrous terrorist group.

So, that’s it, correct, Mr. President? It’s all like a dust-up at school.

Good grief, dude. This ain’t anything to trivialize with such moronic comparisons.

People are dying. They are fleeing for their lives. They live in abject terror every moment of every day they are awake.

How in the world does the president of the United States get away with such shameful, reprehensible rhetoric about an unfolding human tragedy?