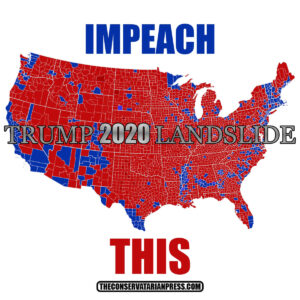 This emblem could be seen throughout the crowd of Donald Trump supporters milling about the American Airlines Center prior to the president’s “Keep America Great” rally inside the downtown Dallas arena.

Oh, it makes for a somewhat humorous response to efforts in the House of Representatives to impeach Trump on allegations that he has broken laws and violated his oath of office by soliciting foreign governments for political help.

The symbol it displays, though, misrepresents the 2016 presidential election result. I might not need to explain what it shows, but I’ll do so anyway.

The blue sections represent the counties that Hillary Rodham Clinton carried in 2016; the vast expanse of red on the map shows those counties that Donald Trump carried.

Impressive, yes? Well … not so fast!

You see, land mass doesn’t count in elections. What matters are the individuals who live on that land mass and how they cast their ballots.

My meaning is quite obvious. Clinton collected nearly 3 million more votes than Trump in 2016. Trump, though, was able to cobble together a narrow Electoral College victory — 304-227 — to win the presidency. He did so with a deft campaign strategy that focused on three Rust Belt states near the end of the campaign: Wisconsin, Michigan and Pennsylvania, all three of which voted twice for Barack Obama in 2008 and 2012. Clinton squandered those states’ electoral votes by essentially taking them for granted. Trump’s victory margin in all three states totaled roughly 77,000 votes; thus, he won their electoral votes and got himself elected president.

Trump didn’t win by a “landslide,” which he keeps saying while campaigning for re-election. It’s just another presidential lie that his followers have accepted as some form of truth.

One thought on “‘Impeach This’ projects false narrative”