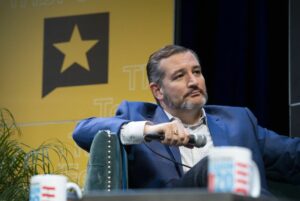 Ted Cruz, who I dislike intensely in his role as the junior U.S. senator from Texas, is speaking out — finally! — on this matter of election interference from foreign governments.

Cruz, the Republican firebrand who nearly lost his seat in 2018, now says that foreign governments have no place in our nation’s electoral system. None, man! He has been critical of Donald Trump’s asking for electoral help from China and Ukraine.

According to the Texas Tribune: During an appearance on CBS’ Face the Nation, Cruz said no foreign government should be involved in American elections.

“That’s true for all of them,” he told moderator Margaret Brennan. “It should be the American people deciding elections.”

OK, so he hasn’t yet declared that Donald Trump needs to get booted out of office because of his solicitation of help from foreign governments. However, his statement — in my view — marks an important turning point in GOP reticence regarding the president’s current difficulties.

Trump is facing increasingly probable impeachment by the House of Representatives over issues relating to foreign interference in our elections. Cruz isn’t likely to join his Democratic colleagues in calling for Trump’s impeachment, conviction and ouster. However, at least The Cruz Missile is standing on an important principle that has been lost on the president.

What’s more, Cruz told Face the Nation that Trump’s lawyer, Rudolph Giuliani, needs to testify before the Senate Judiciary Committee in connection with reports that the former New York City mayor met with Ukrainian officials about Joe Biden and his son, Hunter, regarding Hunter Biden’s business dealings in Ukraine.

Is the senator signaling a turn against a president — who he once called a “sniveling coward” and an “amoral” narcissist who is unfit for the presidency?

I won’t bet the mortgage on it. Then again … stranger events have occurred.