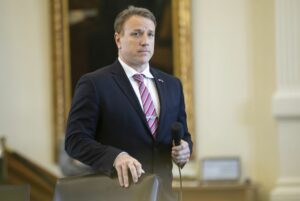 I hear that Pat Fallon wants to run against U.S. Sen. John Cornyn next year.

Who is this guy Fallon? He’s a rookie Texas state senator from down the road in Prosper. He got elected to the Senate in 2018 by upsetting longtime Republican incumbent Craig Estes; Fallon is no political novice, though, having served in the Texas House of Representatives before moving to the other chamber at the other end of the State Capitol.

Fallon seems to think Sen. Cornyn isn’t conservative enough. He wants to steer public policy even farther to the right than Cornyn is willing to take it.

Hold on here! Cornyn, to my way of thinking, is pretty damn conservative. What in the world is young Sen. Fallon intending to do that Cornyn hasn’t already done?

Cornyn fought against the creation of the Affordable Care Act, along with everything else that President Barack Obama pitched during his two terms in the White House; he has resisted efforts to strengthen laws controlling firearms purchases; he is avidly anti-abortion rights; he stands pretty damn firmly in Donald Trump’s corner as the impeachment forces start gathering steam.

That isn’t good enough for Fallon … or so it might appear.

Fallon is a darling of what used to be called the TEA Party in Texas. The term “TEA Party” has fallen out of favor. It now operates under the name of the True Texas Project, apparently believing that only the most fervent right-wingers represent the “True Texas.” I happen to believe that is just so much horse manure.

As for Cornyn, he needs a strong challenger from the left, not the right. Cornyn has demonstrated, the way I see it, that he is as conservative in his thinking as almost any member of the U.S. Senate Republican caucus.

Fallon, for his part, sounds more like a stooge for Empower Texans, that ultra-right wing outfit led by Michael Quinn Sullivan, who’s waging a fight of his own with fellow conservative Lt. Gov. Dan Patrick.