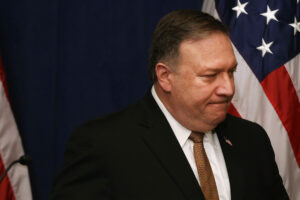 Oh, my goodness. The plot is getting thicker by the hour.

This observation comes from a friend of mine, who posted this item on social media: Pompeo is a graduate of West Point. The United States Military Academy. One of the most important values at West Point is this: “A cadet will not lie or tolerate those who do.”
Pompeo is a liar.

The Wall Street Journal, hardly a left-wing publication, has reported that State Department officials say that the secretary of state, Mike Pompeo, listened in on the phone call that Donald Trump had with the president of Ukraine, Volodymyr Zellenskiy, in which Trump asked his counterpart for help in getting re-elected in 2020.

Except that Pompeo told journalists that he didn’t know anything about the phone call.

Hmm. Who’s telling the truth? The Wall Street Journal is a first-rate publication with first-rate political reporters. I’ll go with what the WSJ is reporting.

This story is growing more legs than a monster centipede.

Trump’s conversation with Zellenskiy wasn’t “perfect,” as Trump has called it. It appears to many of us that the president broke faith with the oath he took by asking for help from a foreign government to help his political fortunes. Moreover, he reportedly withheld appropriated money that Congress had approved to help Ukraine defend itself against Russian aggressors until it agreed to “play ball” with the U.S. president and members of his Cabinet.

Donald Trump has been outed, or so it is becoming clearer, by a whistleblower whose report has helped accelerate the movement toward an impeachment vote by the House of Representatives.

Now we hear that the secretary of state has been revealed to be as blatant and bald-faced a liar as the man who nominated him to be our nation’s top diplomat.