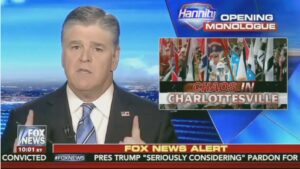 What do you mean, Mr. President, that “Fox has changed”? And you say you’re “not happy with it”?

If you don’t mind my borrowing a phrase: “Big fu**ing deal.”

Fox hasn’t changed, Mr. President. To my way of thinking, it remains uber-friendly to you and what pass for your policies. You still have your friends hosting those talk shows. “Fox & Friends,” Sean Hannity, Tucker Carlson, Jeannine Pirro, Laura Ingraham … am I missing someone? Probably.

It’s just that Fox also has some straight-away journalists who manage to do their jobs. Chris Wallace — who comes from solid journalistic stock, given that his dad was the great Mike Wallace — is but one example of what I mean. Shepard Smith is another. Neither of these men is an apologist for you the way Sean Hannity and the “Fox & Friends” co-hosts have proven to be.

I shouldn’t have to remind you, Mr. President, that answering difficult questions from the media is part of the job you inherited when you won that election in 2016. I know, it’s not written anywhere. But it’s in there, somewhere. Believe me, Mr. President. It’s there.

Your predecessors, every one of them from both political parties, have known that to be the case. You are cursed, though, with the thinnest of skins. As Jack Nicholson’s character, Marine Col. Nathan Jessep, said in “A Few Good Men,” You can’t handle truth!

Maybe you’re upset that Fox has a few token liberal commentators on its payroll these days. I saw where you referred to Juan Williams as “pathetic.” Hey, do you say the same thing about Donna Brazile, the former CNN and ABC News talking head? What about Geraldo Rivera, the grandstander who’s been with Fox since The Flood?

The fact that your perception that Fox has turned on you doesn’t make you “happy” doesn’t mean a damn thing. Presidents cannot dictate how the media do their job. The First Amendment protects the “press” and, by extension, all media from any government interference or coercion. You need to read the Constitution, sir. You took an oath to “defend” it; you damn sure need to know what you swore to protect.

So, my request of you, Mr. President, is a simple one. Pipe down. Shut the hell up. Worry about the important stuff … if you care enough to actually serve all Americans.