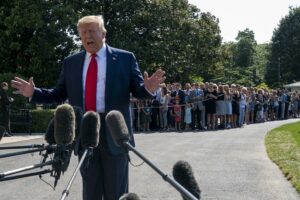 Donald Trump’s ridiculous thrashing and trashing of the media provides so much grist and so much fodder for comics.

Now comes this from the president: The media are trying to torpedo the economy because it is too strong, too vibrant and provides too much fuel to power the president’s re-election bid in 2020.

This man is out of his mind. He’s nuts. He went around the bend long ago, but still … his goofiness reveals a serious delusional tendency.

Trump wrote this on Twitter: “The Fake News Media is doing everything they can to crash the economy because they think that will be bad for me and my re-election. The problem is that the economy is way too strong and we will be winning big on Trade, and everyone knows that, including China!”

The president should know better. But he doesn’t.

The economy is likely to suffer because of the tariffs he keeps imposing on U.S. importers who purchase goods from China. The tariffs create a de facto tax on those products, inflating their cost, making them less affordable to U.S. consumers.

What role do the media play? Oh, let’s see. They’re reporting on it. That is what the media do! They report on policies enacted by the government, be it from the president, or from Congress. The president is seeking to attach steep tariffs on China, ostensibly to publish that government for what Trump says it has done to steal U.S. intellectual property and other transgressions.

Except that China doesn’t suffer the burden on the tariffs. U.S. consumers take it in their, um, wherever.

So, with Trump seeking to shift blame to the media reveals yet again this man’s unwillingness to accept responsibility for anything.

He is projecting his own inadequacies on the media organizations that report on them.