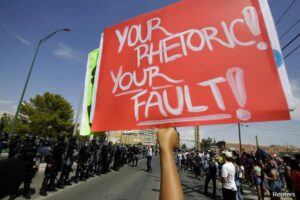 Donald Trump’s attempted outreach to two stricken American communities appears to have not gone according to plan.

I say “appears” because the White House did something quite unusual. It didn’t allow live coverage of the events involving the president. Instead, it released video prepared for public consumption.

You know the drill. El Paso, Texas and Dayton, Ohio were victimized by lunatic gunmen. Twenty-two people died in El Paso; the suspect is a reputed anti-immigrant zealot from North Texas whose actions appear to have been inspired by the president’s own fiery anti-immigrant rhetoric. Nine more died in Dayton later the same day; the gunman there was shot to death by police just seconds after the loon opened fire.

Trump decided to go to the cities ostensibly to lend comfort. It didn’t go well.

Reports indicate he had a cordial meeting with the Dayton mayor and other public officials. Then he tweeted messages en route to El Paso aboard Air Force One criticizing them and the media coverage of the Dayton visit. Good grief, man!

I am trying to recall a time when a president of the United States experienced such profound repudiation from communities stricken in the manner that befell El Paso and Dayton. I cannot remember it happening. Not to President Reagan, or President Clinton, or President Bush 43 or President Obama.

This president, though, is different in every manner one can imagine. The chilly reception well might have something to do with the way he sought to compare the reception he got in El Paso with what greeted Democratic candidate Beto O’Rourke, when he poked fun at the “meager” crowd that O’Rourke allegedly attracted.

How in the name of self-indulgent narcissism does a president say such a thing in public, out loud at a time he should be concentrating solely on the victims? I guess it has something to do with what has been undeniable for a very long time: Donald Trump does not possess the capacity for empathy.