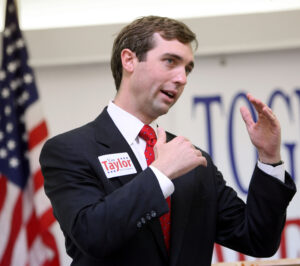 Taylor is a young freshman Republican in the People’s House. He didn’t say so directly, but I am sensing a deep personal pain in the wake of the El Paso massacre that erupted over the weekend, mere hours before another gunman opened fire in Dayton, Ohio, killing nine victims. Twenty-two people died at the hands of a lunatic who allegedly traveled more than 600 miles to El Paso to do harm to “as many Mexicans as possible.”

Why is Taylor feeling so much pain? The alleged shooter is a constituent of the congressman.

The alleged gunman graduated from Plano High School. He had lived with his grandparents in Allen, which is right next door to Plano.

Rep. Taylor told me that the act of one individual shouldn’t tar an entire community. He spoke to me today of the standard of living in Plano, how it ranks highly among cities of comparable size in any study one can name. It has a stellar per-capita income, along with the education level of its residents, he said.

He hasn’t visited El Paso in the wake of the massacre. I am not sure when he’ll go. Taylor did tell me he has spoken with El Paso Mayor Dee Margo, with whom he served briefly in the Texas Legislature.

I ended up telling Taylor that I was “in your corner.” I am pulling for him and his colleagues as they seek answers to this dual-track tragedy. I only intend to demand them to explore deeply any possible avenue they can to curb this gun-violence insanity.

Indeed, I believe this young man is hurting.