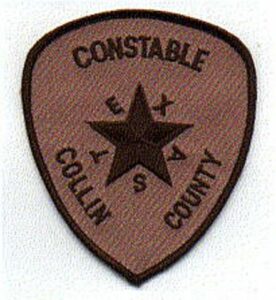 I made the acquaintance today of a young man whose job causes the hair on the back of my neck to bristle … and I mean no disrespect to the individual himself, as he is a nice, earnest and dedicated public servant.

Or so I will presume for the moment.

He serves as a constable in Collin County. I won’t identify him just yet; that might come later if I choose to write any more about this matter.

You see, I have long had bur under my saddle about constables. I dislike the office. I have lived in communities as disparate as Beaumont and Amarillo that have had regrettable experiences with constables.

To be candid, I believe the elected office is superfluous. State law empowers constables to issue civil papers; that’s their primary task. They issue papers, such as eviction notices or court summonses. They also provide courtroom security for justices of the peace. And, yes, they have the authority to make traffic stops or assist police when the need arises.

However, as I have noted before, these duties can be done by sheriff’s deputies. Or by municipal police officers.

When I was working in journalism for many years I had the chance to comment on constable goings-on. In Jefferson County, for instance, voters elected a constable who wasn’t certified by the appropriate Texas law enforcement authorities. He vowed to obtain his certification — eventually! He failed to meet the deadline and was removed from office.

Potter County had a constable who didn’t do any work. It had another constable who enjoyed acting the part of dedicate law enforcement official, but fell far short of actually doing the duty.

In Randall County, there was a constable who pledged to surrender his office because there wasn’t enough work, only to think twice about it. He stayed on the job and battled county commissioners over his salary. Then Randall County voters elected a constable who campaigned on the pledge to not to do any work, enabling the county over time to disband the office. He then was gerrymandered out of office after the 2010 census was completed.

I still dislike the constable’s office. It is unnecessary. It also has a powerful lobby in Austin that fights for constables and justices of the peace.

I wish my new acquaintance well as he performs his constable duties. However, I would cheer loudly if the Texas Legislature ever finds the guts to get rid of the elected public office.