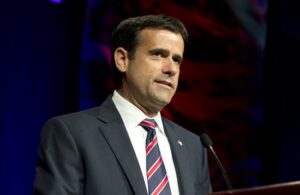 An item has been brought to my attention, so I want to share it with you here.

The fellow set to be nominated as the nation’s next director of national intelligence now serves the Fourth Congressional District of Texas, which once was served by one of the great Texas politicians of all time, three-time U.S. House Speaker Sam Rayburn.

The current congressman, John Ratcliffe, will be named soon to succeed Dan Coats, who is, um, “stepping down” as DNI. It seems that Coats and Donald John Trump have had some serious differences of opinion over the Russians’ role in the hacking of our election system in 2016. Coats says the Russians did it: Trump sides with the Russians who deny doing it.

To be fair, Ratcliffe’s national intelligence credentials are no skimpier than those that Dan Coats brought into the office. Coats, though, proved to be one of the few mature grownups to serve the Trump administration.

The jury is still out on Ratcliffe, a fervent, strident, ardent supporter of Trump. I await the questioning from senators who will ask whether he supports the Coats view of Russian hacking or the Trump view that it was all a “hoax.”

As for the Rayburn legacy, I’ve had the pleasure of writing a blog post for KETR-FM, the public radio station based at Texas A&M-Commerce, the talks about the Rayburn Library and Museum in Bonham. You can see the KETR piece here.

While touring the exhibit, I found a statement attributed to Mr. Sam, the legendary Democrat, that I believe is quite fitting in today’s climate. He says it is better to always “tell the truth” because you never have to worry about what you say.

Ratcliffe is set to join a presidential administration that seems to consider truth-telling to be some sort of sin, a sign of weakness.

How would Speaker Rayburn react to that? I sense he might be doing cartwheels in his grave at this very moment.