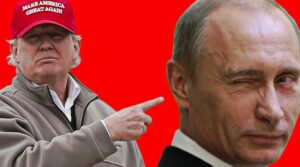 Those of us who are old enough to remember such things must be wondering: What has become of the Republican Party’s historic animosity toward Russia?

The party of Ike, Nixon and Reagan has become squishier than the Democrats were during those earlier eras. Russia — which once was known as the Soviet Union — attacked our electoral system in 2016. They did with malicious intent to disrupt our process and sow discontent among Americans about the integrity of our voting system.

Democrats now are incensed. Republicans? They are silent.

Democrats are pushing for measures in Congress that would strengthen electoral integrity and security. Republican leaders are blocking it.

Former special counsel Robert Mueller III told the nation that Russians not only attacked our 2016 electoral system in “sweeping” and “systematic” fashion, but are in the process of attacking our system at this moment.

The GOP leadership in Congress — and in the White House — are acting as if, “Hey, no big deal!”

History reminds us that in the days of Dwight Eisenhower, we shored up our military to counter the Soviet Union’s aspirations to become he world’s greatest power. Then came Richard Nixon, the noted communist-hater who made no apologies for his hatred and mistrust of the Soviet leadership. After that, the nation heard Ronald Reagan refer to the USSR as the “evil empire” and once joked into an open mic that he had just “outlawed Russia; bombing begins in five minutes.”

These days the equation has been flipped on its ear. Republicans give Russians a pass on the attack they have launched on our electoral system. Democrats have become the hardliners.

I believe this is a manifestation of the Donald Trump Era of national politics. What once was “normal” no longer is normal. Conduct we used to abhor has become part of what we believe is a “new normal.”

Russian attacks on our political system that used to become fodder for Republican politicians’ ire have become reasons for them to zip their lips. They say nothing. Meanwhile, the Democrats have become the hardliners.