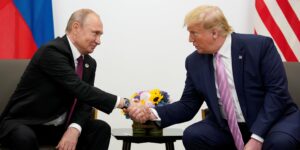 Robert Mueller III’s testimony today before two congressional committees was full of signature moments that have drawn analyses and commentary from individuals who are a lot smarter than I am.

Still, I want to offer this brief perspective on a statement that jumped out at me. It wasn’t an original thought that Mueller offered today, but was a repeat of his the final words of his nine-minute presentation this past May.

He said today as he said then that the Russian attack on our electoral system in 2016 should be of “concern for every American.”

Every American! That means you, too, Donald John Trump.

The attack, though, does not seem to “concern” the president of the United States. It certainly should concern him.

Mueller today told the nation — and the world! — that the Russian attack was “sweeping and systematic,” which, again, was what he said in his 448-page report. He told House Judiciary and Intelligence committees the same thing today.

How in the name of national security does one persuade the president that “every American” includes the man elected to lead that nation. He is the man who benefited directly from Russian efforts to influence the 2016 election outcome. He is the man who should be horrified at the prospect that our sacred electoral system is vulnerable to the kind of attack that the Russians launched — and are, in Mueller’s words, doing so “at this moment.”

Trump, though, is not acting like someone who shares the concern of Mueller, not to mention many millions of Americans.

How is it that Donald Trump and his political base of loyalists can justify their looking askance at what amounts — at some level — to an act of war against our political system?