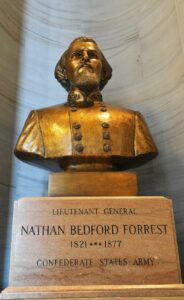 How in the name of human decency can a governor of one of our 50 states proclaim a desire to honor the memory of a Ku Klux Klan leader?

That’s what happened in Tennessee, where Gov. Bill Lee signed a proclamation honoring Nathan Bedford Forrest, a onetime Confederate general … who also happened to be a slave trader and a grand wizard of the Ku Klux Klan.

This is disgraceful in the extreme. Lee’s declaration has drawn rebuke, understandably, from Democrats but also from fellow Republicans, such as U.S. Sen. Ted Cruz of Texas.

“This is wrong,” Cruz said on Twitter. “Nathan Bedford Forrest was a Confederate general & delegate to the 1868 Democratic convention. He was also a slave trader 1st Grand Wizard of the KKK. Tennessee should not have an official day honoring him. Change the law.”

Cruz also said he doesn’t necessarily disagree with honoring Confederate soldiers, but that’s another topic for another day.

Any law that sanctions such commemoration of individuals who took part in brutality against fellow human beings, such as the Klan, must be repealed.

Gov. Lee said he was following the law. Are you kidding? Does the law require a governor to honor someone who sanctioned the killing of others because of their race?

One thought on “How can you ‘honor’ a Klansman?”