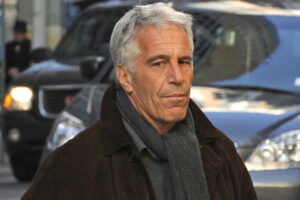 What in the world is going on here?

Now we hear that one of Epstein’s BFFs, a fellow named Donald Trump, has yammered about what a “great guy” Epstein is and how Epstein likes the company of beautiful women, some of whom are, um, a good bit younger.

These are federal charges which — if you’re following the news over the past year or so — means that the president of the United States could actually pardon this guy of the crimes for which he has been charged. Of course, I refer to the president being the same Donald Trump who talked about Epstein being such a great guy.

It’s fair as well to wonder: Is there a connection of any kind between this individual’s alleged misconduct with girls and the president of the United States who’s been charged with assorted allegations of sexual assault?

Oh, I almost forgot. We have the matter involving a former Florida federal prosecutor who didn’t file charges against Epstein when they first surfaced. That ex-legal eagle is now Labor Secretary Alexander Acosta. It’s a tangled web, indeed … yes?

I just had to ask.

This Epstein matter has the potential of growing some serious legs, if you know what I mean.