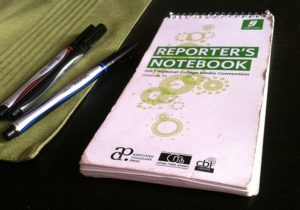 News of the Beaumont Enterprise building heading to the “For Sale” block brings back a flood of memories of great times there and many memorable encounters I experienced while toiling in the Golden Triangle of Texas.

I want to share one of them here. It takes a bit to explain, so bear with me.

I was walking across the newsroom one day, heading for the third-floor elevator. I noticed a gentleman standing next to desk occupied by our newsroom secretary, the legendary Marie Richard, who was on the phone at that moment. I walked past the gentleman, then did a bit of a double-take.

I stood by the elevator, pushed the call button and waited. I then leaned around the corner, got Marie’s attention and whispered — apparently in a “stage whisper” sort of voice — “Is that Jim Lehrer?”, the longtime co-host of the MacNeil/Lehrer NewsHour on PBS.

Marie shrugged silently, but then the man standing at her desk said, “Yes. It is.”

Oh, brother. I was, um, a bit embarrassed. I walked to Marie’s desk, extended my hand and introduced myself to one of the great broadcast journalists of his era. 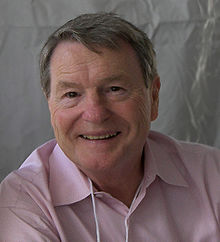 Lehrer then began to tell me why he was standing in the Beaumont Enterprise newsroom. He needed to go the newspaper library, he said, to do research on a book he was writing about when he lived for a time in Beaumont as a youngster.

We walked back to the library and spent the better part of the next hour or so talking about this and/or that. I learned that Lehrer attended middle school and then French High School in Beaumont, that his father drove a bus (either Greyhound or Trailways, I cannot remember) and that Beaumont was one of many stops the Lehrer family made when young Jim was coming of age.

We hit it off well … I believe.

Lehrer returned the next year to be the keynote speaker at the Press Club of Southeast Texas annual luncheon. We shook hands at that event, too.

And, yes. Jim Lehrer remembered this chump editorialist who embarrassed himself at the elevator.

One thought on “Time of My Life, Part 35: This was one memorable encounter”