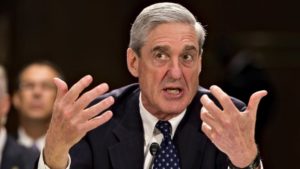 Mueller has finished his investigation into whether the Donald Trump presidential campaign “colluded” with Russians who attacked our electoral system. He and his legal team wrote a 448-page report; he turned it in to Department of Justice; Mueller remained silent until this week.

Then he spoke for nine minutes and said he had quit the DOJ, is returning to private life and said that his staff could not exonerate Donald Trump of allegations that he has obstructed justice.

Let me think about this. I believe the ex-special counsel has declared that Trump has committed a crime by obstructing justice. He said he couldn’t indict the president because DOJ policy prohibits a sitting president from being charged with a crime.

Oh, but now some members of the right-wing Freedom Caucus — such as Reps. Jim Jordan, Mark Meadows and Devin Nunes — want to eviscerate the former FBI director. They want to question his motives. They want to cast aspersions on his credibility, integrity, perhaps even his love of country.

Hmm. Well, I am one American who believes in Robert Mueller. I honor his decades of public service — starting with his enlisting in the U.S. Marine Corps and his combat service in the Vietnam War.

I also am quite certain that this combat veteran is not going to be cowed or intimidated by some grandstanding politicians who intend to make names for themselves.

Those who know Robert Mueller have signed off on his impeccable integrity and his commitment to conducting a meticulous investigation. He has served the nation well.

I heard his nine-minute soliloquy this week. I understand what he said. He has said in terms that ring with crystal clarity that had he and his team been able to clear Donald Trump of obstruction of justice that they would have done so.

Congress, it’s now up to you.